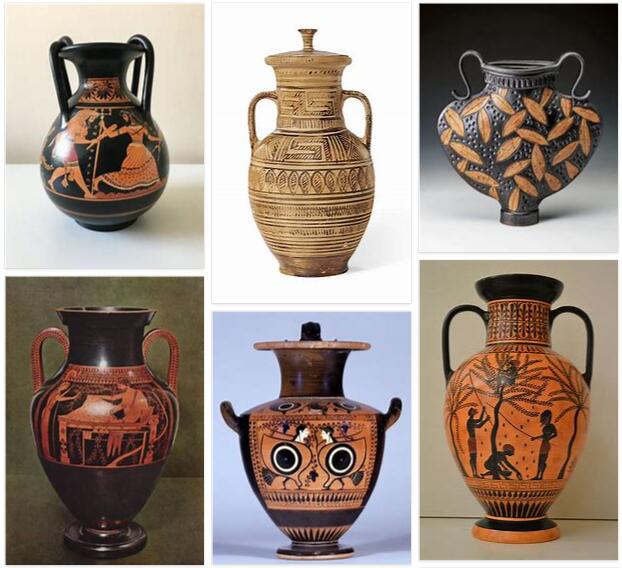 Between 480 and 470 the style of Attic ceramic painting changed from severe to grandiose: the anatomical and drapery conventionalism began to dissolve; the eye, previously always represented in the front, approaches the profile. Euphronius was still in charge of a well-known workshop when this change took place. In the grandiose style we feel the immediate influence of Polygnotus of Thasos and his school; it is the tragic sublimity that is expressed with grandiose figures, mostly in fighting action (gigantomachy, centauromachy, amazonomachy), and the polygnothean composition begins to introduce itself in the vases at various levels, as in the famous crater of the “Argonauts” and Niobids of Orvieto. Given the grandiose character of the figures, the vases are grandiose; no longer the cup, but the volute amphorae, keléb ē). But the names of the potters become rare in this phase which reaches up to 450 BC. C. The grandiose style is followed by the beautiful style, which we could also call the fidiac style; by now the drawing is completely dissolved from the ties of archaism and the figures acquire, in their ideal features, great severity and composure. It is the phase in which the funerary lékythoi, those elongated white vases, decorated with polychromy, mostly with mortuary scenes, have the greatest expansion.

Meanwhile, starting from 450 a. C. is making its way into another address of art, an address of graceful gentleness, with small figures, so that we can call it with the epithet of miniaturist. This trend excels in Midia’s signature hydria and in the vases that can be grouped around it; in this way we arrive at the end of the 5th century BC. C., when the disastrous outcome of the Peloponnesian war for Athens, making it difficult for the outlets of vasaria goods in Italy, greatly restricts production, leading it to inevitable decay. In the mediocre production of the first decades of the century. IV a. C., in which the midiac address is continued, few vases emerge, including the well-known Pronomo amphora of the Naples Museum.

But starting from the decade 380-370 a. C. is a brief revival of Attic pottery. They are the so-called Kerč vases, because they were mostly found in that locality (the ancient Panticapeum) in the Crimea, where most of the Attic vases were then directed to. To the evanescence, to the gentle gracefulness of the midiaco stylethe solidity and plasticity of figures, however graceful, are replaced, in which one seems to feel the echo of Scopa on the one hand, and that of Praxiteles on the other. Nor are there lacking in this phase configured vases and vases in relief demonstrating the same qualities. But soon there is exhaustion; near the end of the century. IV a. C. Attic pottery with painted figurative scenes disappears; the last products of this Attic pottery, now of full Hellenism, are covered with black, shiny paint with simple ornamental motifs, in which it is rare to meet the human figure.

As a derivation of Attic pottery we can adduce the Italiot pottery.

At first, in the times of Pericles, there are the products perhaps due to Turî and Eraclea, but also to Ruvo and Taranto, where the nobility of the Attic Fidiac forms is still striking, but then, starting from the century. IV, the three regional styles, Apulian, Lucanian, Campania, are being constituted, with their distinct characters. With Taranto, some want to reconnect a genre of vases, in which burlesque scenes are derived from phialic representations. In Apulian ceramics there are frequent vases of grandiose shapes, with mythical scenes, but especially with mortuary scenes, of cult to the tomb; there is wealth and exuberance, which then degenerates into stereotyped, banal forms. Heaviness and vulgarity are in the Lucanian ceramics, coarseness and sloppiness emerge from the Campania ceramics. A separate factory of vases with figured scenes seems to have been established in Lipari, a second factory in the Etna area; but they are factories of not many products, while for Sicily we must mention in the middle of the Hellenistic period the peculiar ceramics of Centuripe, in which the relief, of an architectural and polychrome character, is combined with the pictorial decoration with figures expressed on one layer lime.

Offshoot of Attic pottery of the last times of the century. V is the Faliscan pottery, which has purity of form in the most ancient specimens; but banality and vulgarity soon took over, which are also characteristics inherent in painted Etruscan pottery of the century. IV, of Hellenic derivation, however pottery which must be recognized for its power, uncommon expressive vigor (see Etruscans, page 523). As in Attica, in the Hellenistic period, vases with figured scenes were succeeded by vases painted black, with few overlaid decorations, so we see an analogous substitution in southern and central Italy, both with the so-called vases of Gnazia, and with the Etruscan-Campanian production, which precedes the so-called poculapaintings.

They are all documents of tiredness, of the exhaustion of the vase painting; we can add other documentation: the Hellenistic vases, which include the centuripine ones, with a light background and polychrome figures, the especially Cumane vases, the Hadra vases, in the vicinity of Alexandria in Egypt, especially funerary hydries with decoration and black figures splashed on the yellowish bottom of the clay, the so-called lágynoi or bottles with very petty decorations on the black background (see the vases of Gnatia).

For the relief pottery in the Hellenistic age we have the megarese cups, original metallic imitations, with their derivations in various locations in the Mediterranean (Crimea, Pergamum, Cales). Finally we have the ceramic with figures or parts of plastic figures, in which the caricatural, realistic address of art, especially Alexandrian, is reflected; while at Canosa we must fix the heavy Askoí, lacking in good taste and measure, overloaded with statuettes, protomes, heads, and with a brazen use of polychromy.